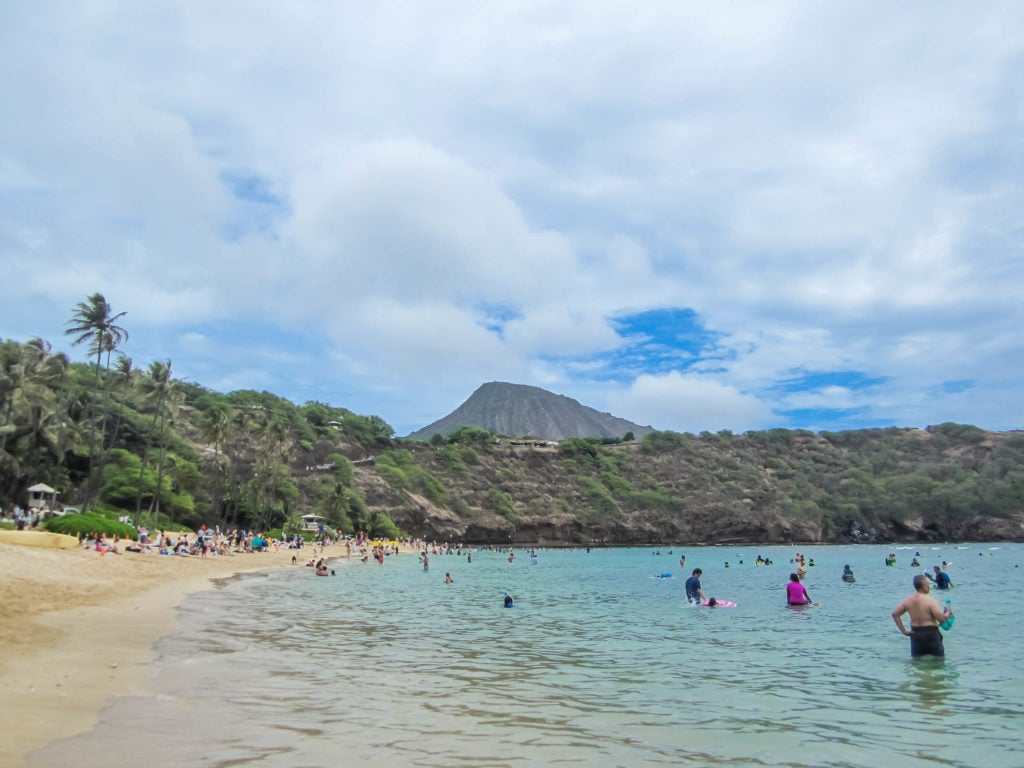 We’re back from our vacation to Honolulu, Hawaii with the kids! And what a trip it was!

My husband booked this vacation earlier in the year for our 10th wedding anniversary (which was in August) but kept it a surprise from me until 2 weeks prior to leaving. What we didn’t know was that before we were to leave for our trip, Hurricane Lane was brewing in the Pacific.

Now, for those of you who don’t know, hurricanes are quite rare in Hawaii. There have only been 1 hurricane (Iniki) that has caused major damage to Hawaii.

So while I was attuned to the news and hoping that the hurricane would pass, I was a little worried when we landed and our shuttle driver exclaimed that we were storm chasers, and that the entire week would be filled with rain.

The first night we arrived, it was past 12am Vancouver time. We arranged our shuttle to our hotel, got a quick bite of ahi tuna poke and roast beef and potatoes from the convenience store around the corner and headed straight to bed.

The following day, I awoke at 4am (which I kept doing for the duration of the trip as my body hadn’t quite adjusted to the time difference). The sun rose and I looked out the window to see some sun and cloud, but nothing imminent of a storm. We eagerly set out to Costco, the Dole Plantation, and Giovanni’s Shrimp Truck. 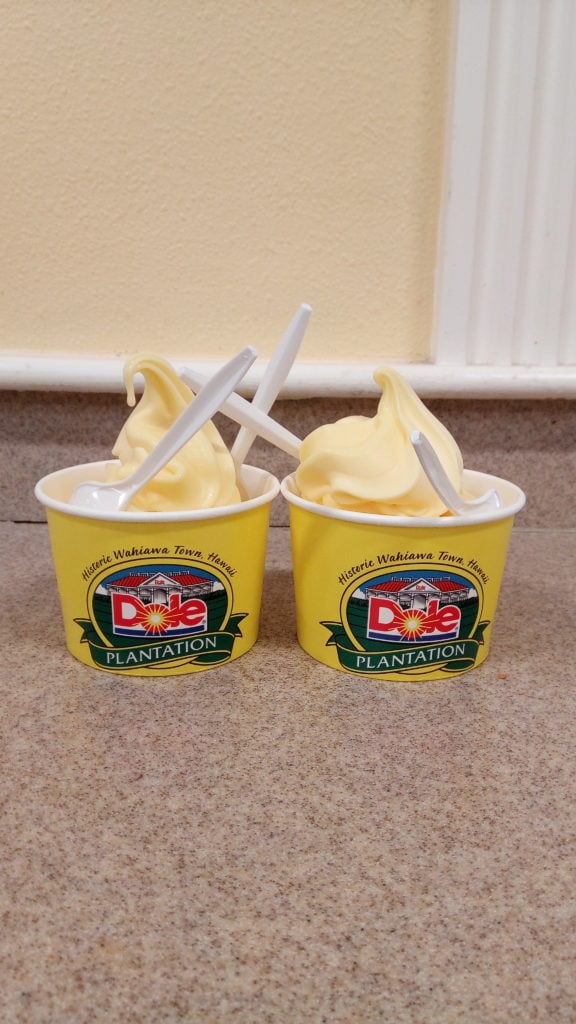 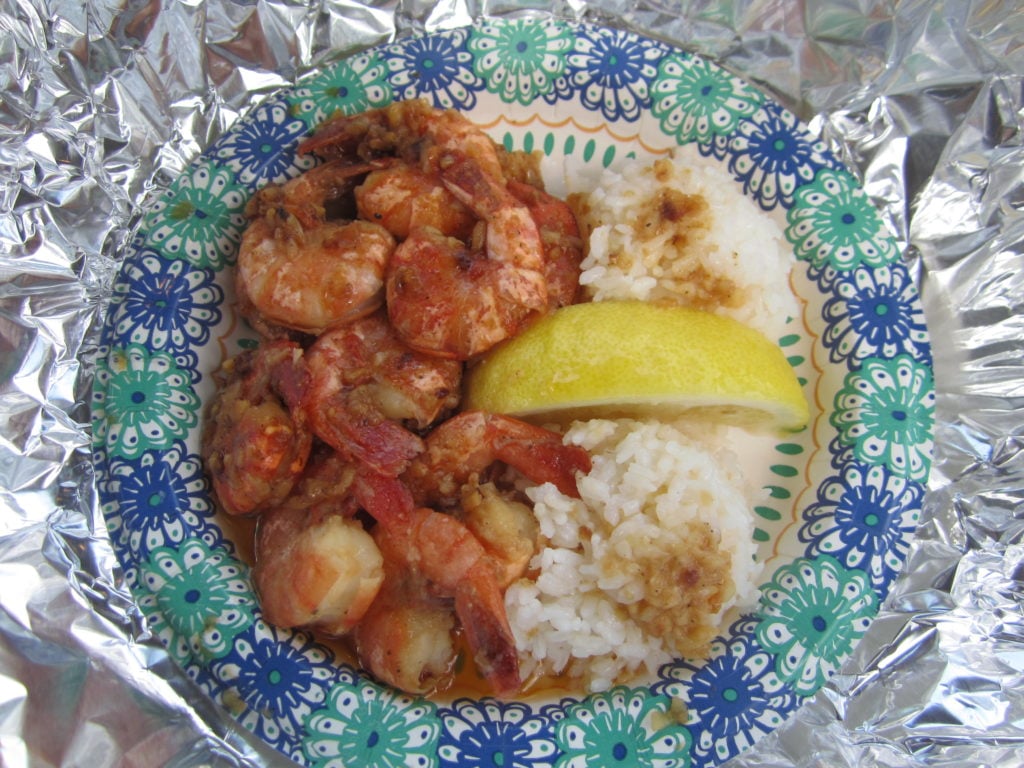 At Costco, we had planned on getting a case of water, and some fruit, but when we got there, we scoured the entire store to find no water. We must’ve walked around 4-5 times, before I told hubby to settle on a case of Italian sparkling water instead. When we were checking out, however, I noticed a bunch of military personnel were carrying cases of bottled water! So I asked the lady who was checking the receipts on the way out where they kept the water. She replied that they JUST got in a pallet, and that we had to act fast if we wanted any. So hubby doubled back to secure us some more water.

We had planned a photography session with a local photographer, but that wasn’t to happen until later in the afternoon, but by the 4pm, dark clouds rolled in and it was raining quite a bit. Luckily, by some miraculous reason, when it was time for our session, the rain had stopped.

After our session, the kids were starving so we went to McDonalds to get them some fries and chicken nuggets (I know, the kids’ first time having McDonalds!), and I stopped into Foodland to try to get some poke, only to be told that they were closing up shop. It was then that I realized the severity of the hurricane as the shelves were all empty out of water and food. People were scrambling around to get whatever they could get their hands on. So we stuffed our basket with some taro bread, bagels, a loaf of bread, and some butter. 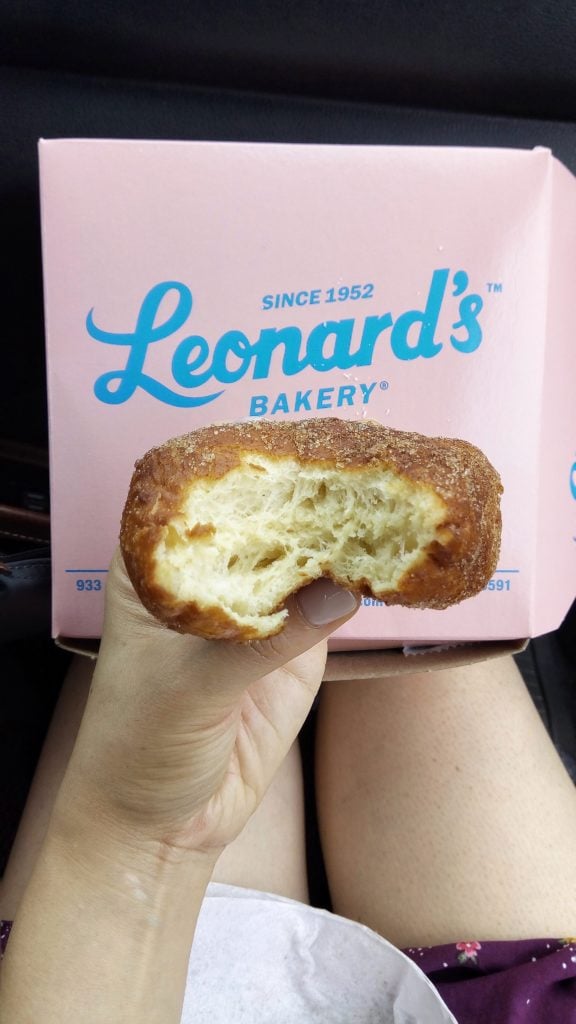 The day of our anniversary, we made a quick stop at Leonard’s Bakery to get some malasadas, and then head out to go to Hanauma Bay, which was on my bucket list of things to do — but when we got to the beach, it was gated off due to the impending storm. I was disappointed since we had driven about 40 minutes to get there, but nonetheless, we stopped into Rainbow Drive In to get hubby’s loco moco, and I returned to Foodland to get some poke. I ended up getting 4 different types of poke. 🙂 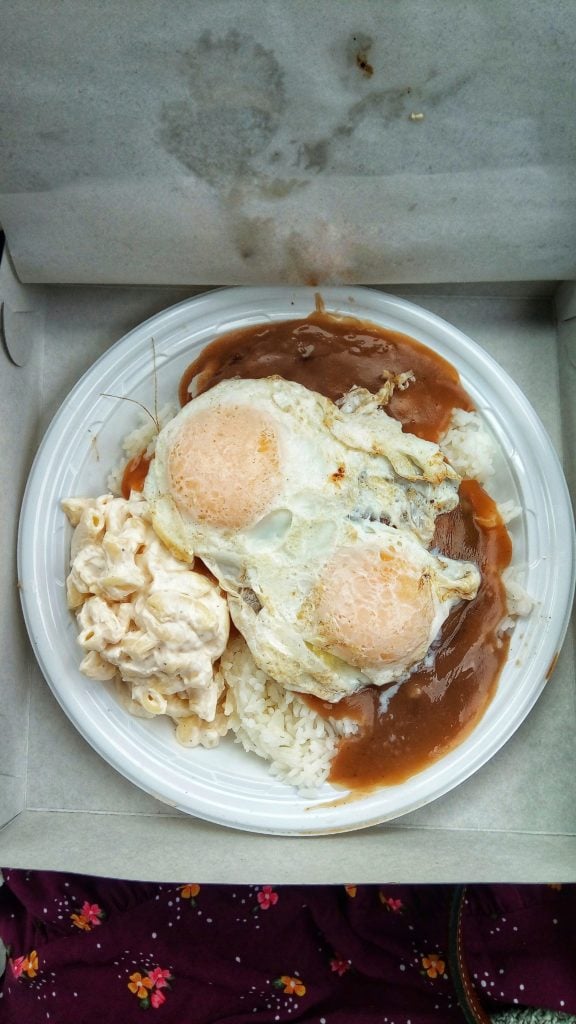 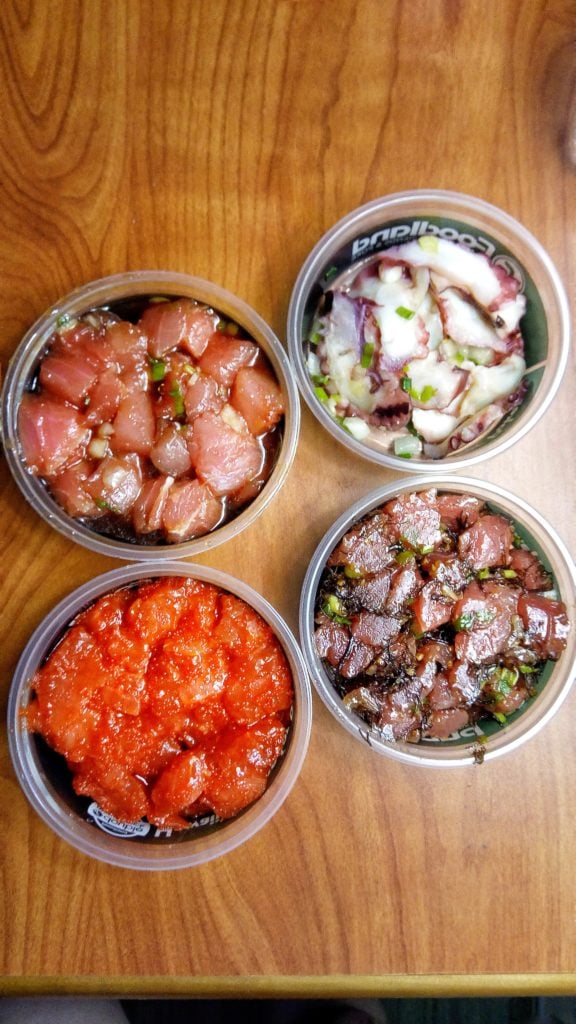 Upon returning to our hotel, we found a notice slid underneath our door alerting us to the hurricane and to have enough food for at least 24 hours. Hubby was a hero and went out to get some noodles and spam musubi for the kids. Since the hurricane was coming in at a Category 5, the state of Hawaii decided that they would some an emergency siren at 4pm, warning everyone to stay indoors and seek shelter. We originally booked our rental car for 3 days, but seeing that there was no possibility of going out on the Friday, we decided to return our car early. Stores in Honolulu were closed early, and some boarded up significantly in preparation for the hurricane. 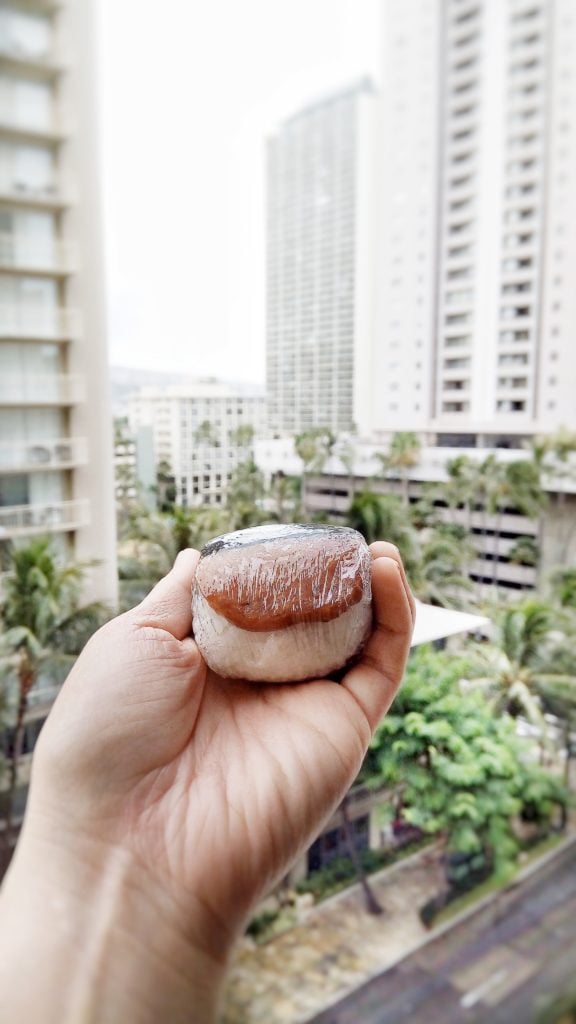 The day of impending doom…. the winds howled overnight, the skies were grey and overcast. Waikiki was a ghost town, with the exception of a few brave souls who did venture outside. Even ABC Stores was closed (which is normally open 24/7). But nothing really happened.

We waited, and waited, watching the news on TV, and then about afternoon, the kids were going stark crazy, so we looked outside and saw some people milling about. Then we decided we would go for a short walk — nothing too crazy, if there was any change in weather, we would turn around and head back to the hotel. 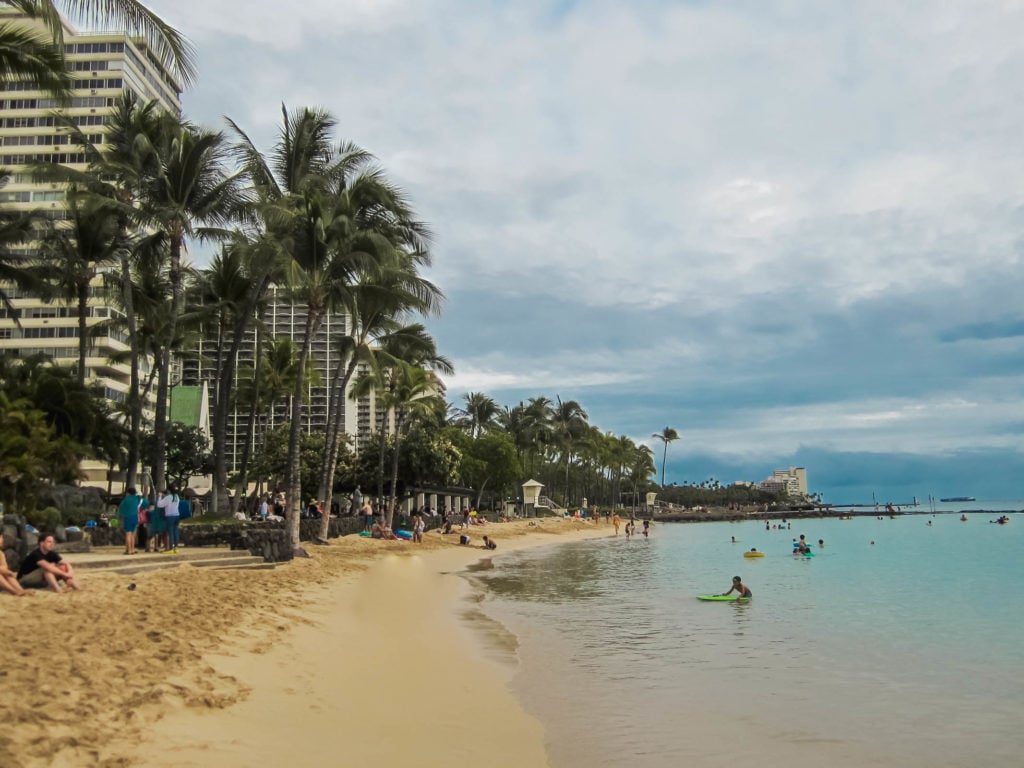 We ended up at Waikiki Beach where the tide was high, and yet there were daredevil surfers and lots of visitors around. Funny enough, it’s as if they hadn’t heard that a hurricane was suppose to happen.

The following day (Saturday), the hurricane was downgraded, as it had pushed westward, missing Oahu, so everyone pretty much breathed a sigh of relief. Businesses started to open up again and people were filling the streets. Hawaii really dodged a bullet with the hurricane. WE DODGED A BULLET. Our vacation could’ve been us sitting in a hotel for 5 days, but we are so thankful that we were able to enjoy our trip without much disturbance.

We started off Saturday with Marukame Udon, which is a fast-paced cafeteria-style noodle house with a small menu. They focus on udon, and offer a few varieties of it. There’s the option of beef and onions (niku), egg (tama), and different broths. They also offer tempura shrimp and veggies, musubi, onigiri, fried chicken (all a la carte). It was delicious, filling, and cheap. We came back 3 more times during our trip for breakfast (it was that good!) 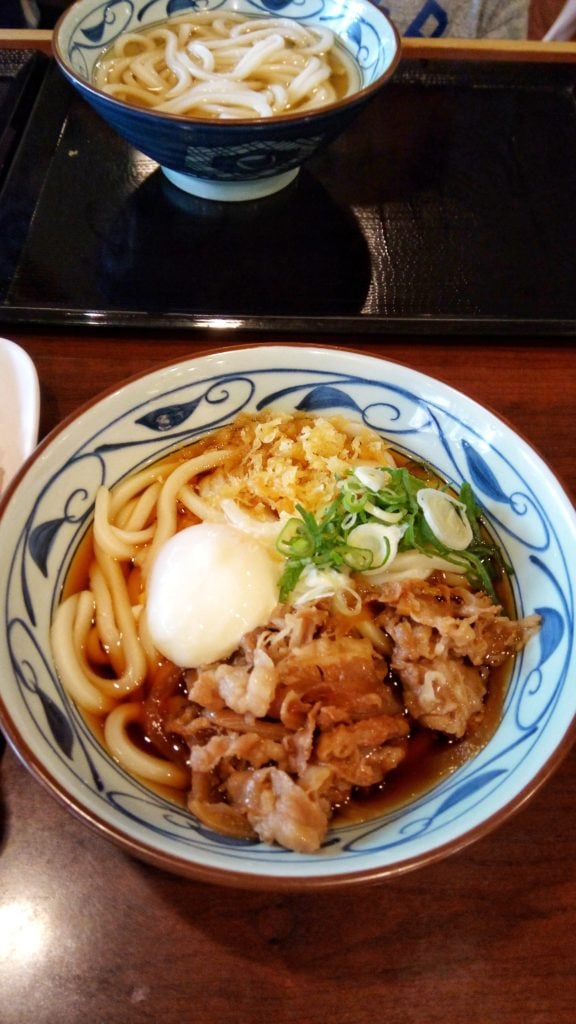 After Marukame, we explored the Mitsuwa Marketplace, where we grabbed more mochi donuts from Modo Hawaii and then took a bus to explore the Art Gallery since the bus was free that day. Unfortunately, the Art Gallery was closed so we wandered around until the kids got tired. We took the bus to Ala Moana Shopping Centre and ended the day with fried chicken from Jolibee. 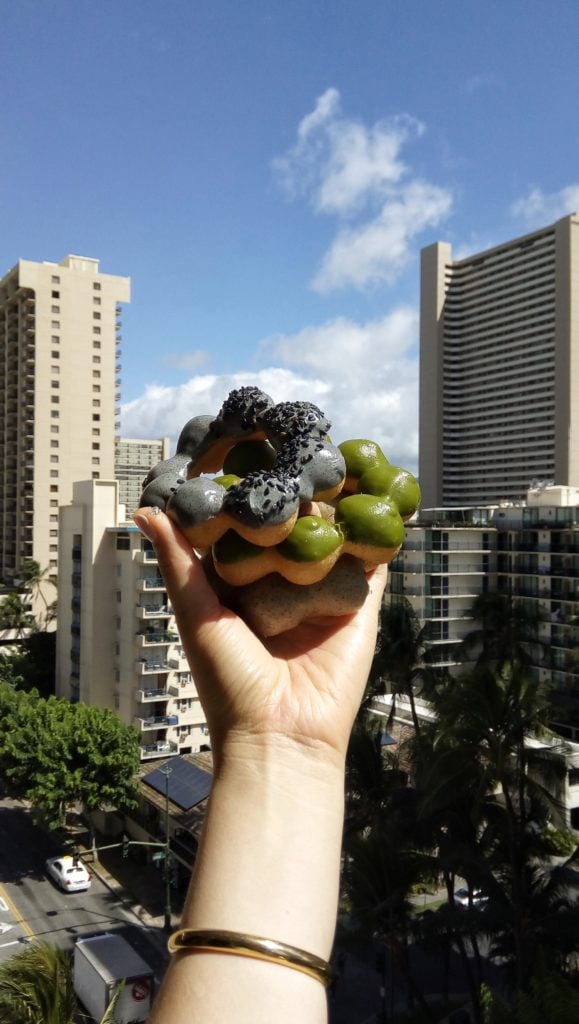 Sunday morning, we went to church in Waikiki, and then headed to Matcha Maiko Cafe, and then trekked all the way to the Hilton Hawaiian Village to get an Acai bowl from Lanikai Juice. The kids were such troopers, walking all the way there and back. 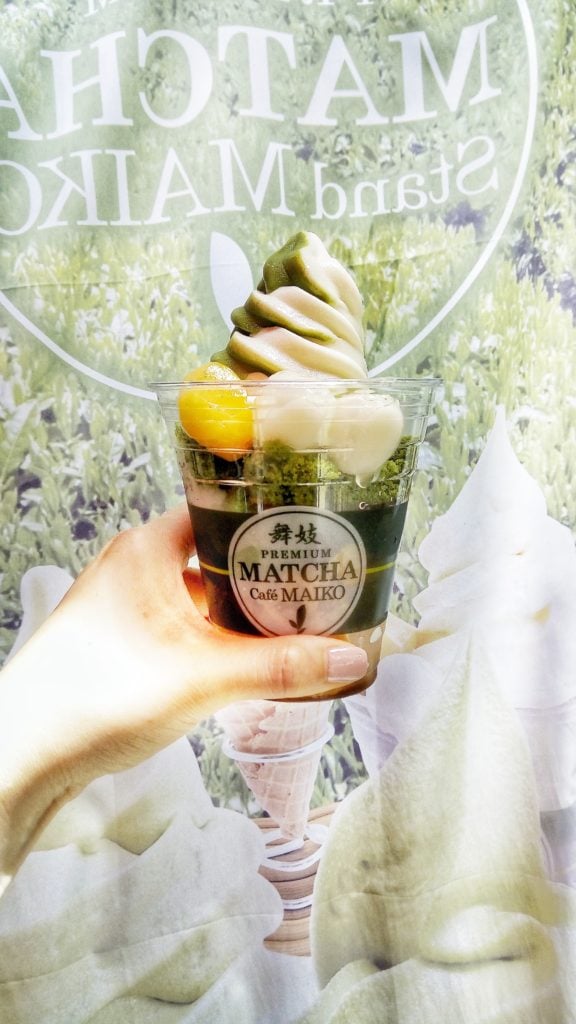 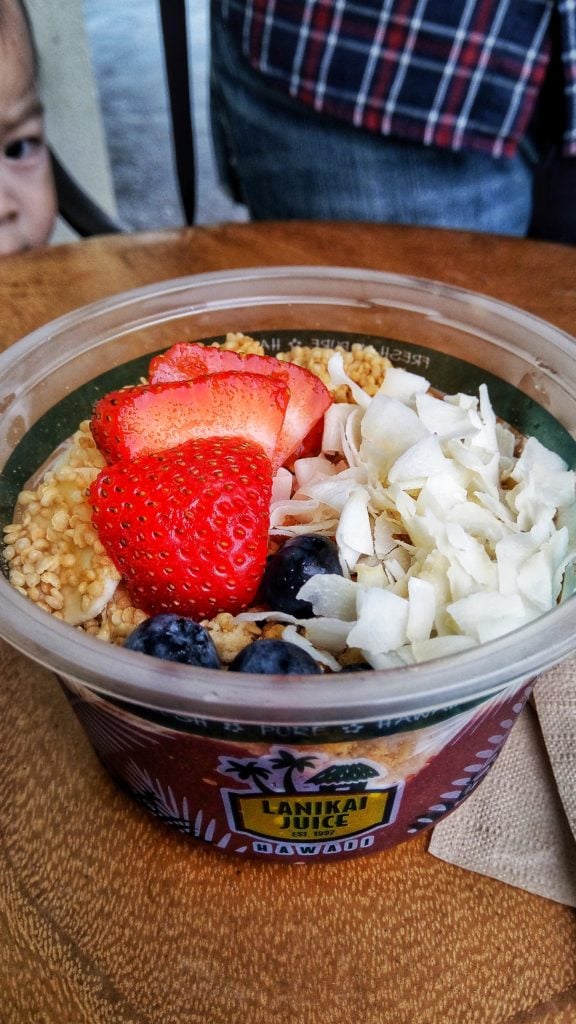 Each day, we checked to see when Hanauma Bay would be reopened. Most of the state beaches and parks were open by Sunday, except for Hanauma Bay. My prayers were answered then they announced that it was going to be open on Monday (since it normally closes on Tuesday and we were leaving on Tuesday evening). So, our last full day, we spent at Hanauma Bay. 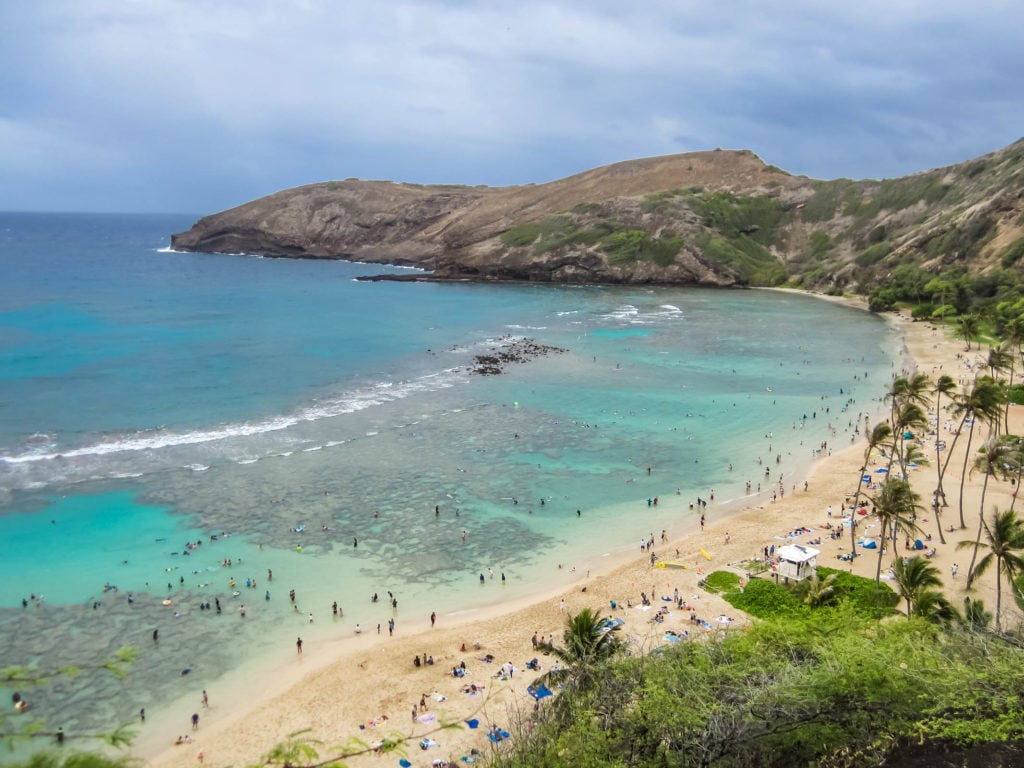 Tuesday morning, we took our time cleaning up and checking out since our flight wasn’t until 10:30pm. We ended up wandering around and having an early dinner at The Cheesecake Factory (turkey sandwich with Mexican tortilla soup + key lime cheesecake was amazing). And headed off to the airport, where we caught the overnight flight back to Vancouver.

And so you have it, our trip to Hawaii with 2 young kids, and an imminent hurricane (that luckily it didn’t hit us). If you made it all the way down here, thanks for reading! Let me know, have you been to any of the places I mentioned? 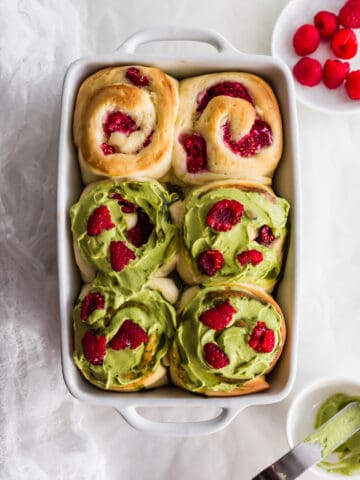 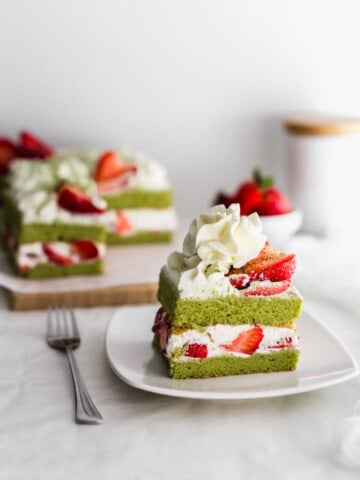 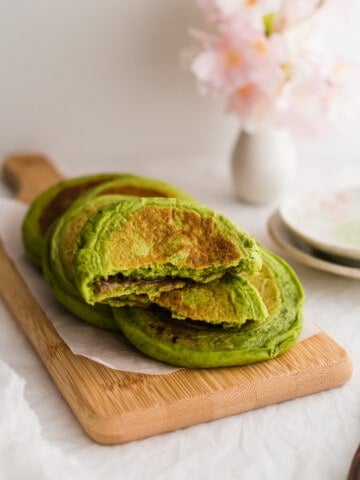 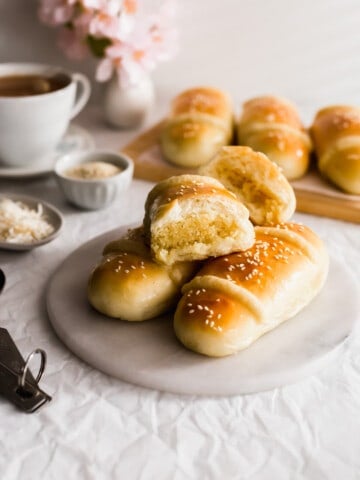 A little more love. 💚 New recipe on the blog to

Pineapples on pizza... 🍍🍕 contentious, I kno

Coming at ya with a new recipe: Taro & Pitaya Moch

I got the sweetest comment on my Matcha Brochi (br

Hojicha Hot Chocolate. 🤎 It will soothe and com

It's almost New Year's which means lots of keropok

Merry Christmas Eve! 🎄 A little sad that I won'